The best episode of Star Trek I’ve seen on the big screen in a while. 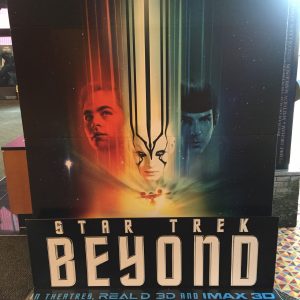 This movie is not the action adventure we saw in the first two segments of the Star Trek reboot or what we see in the Fast and Furious epic. It’s episodic the same way Into Darkness was to  2009’s Star Trek, but Star Trek Beyond acts so much more like an episode of Star Trek rather than a movie, which I love, because I like Star Trek as a TV series more than I like it as a motion picture.

It’s not the bell’s and whistles, solar glossy flares that  Abrams did (and totally brought life to the dead franchise so this is not me putting down what the Episode 7 director did at all). It’s a quiet and slow moving pace that builds on the depth of the characters and the sophistication of the story, that is more what we expect from Star Trek, but at the same time keeping with the fact that this has to appeal to the contemporary audience.

The idea is that the movie takes place three years into the five year mission (or approximately when the original star trek series ended). Not the same man who beat the  Kobayashi Maru, Kirk realizes his career in StarFleet  was more him trying to be like his father than being his own man. They honor  the death of Leonard Nimoy with a story in which Spock Prime’s death makes Spock contemplate his importance among the Vulcans who are still an endangered species.  These guys need a boost in moral.

In comes Krall, who sucker punches the Enterprise, forcing them to crash land on a hostile planet so he can get his hands on a weapon he wishes to use to end the Federation. Kirk needs to find his crew and get them off the planet  in order to stop this lizard-like dictator from succeeding.

The first five to ten minutes of the movie were visually amazing. Wait till you see the space station York Town, it’s fantastic. The movie attempts to be big like Abrams, episode Seven, and they did it. Space is big and they proved it. The backdrop of the planet was quite nice too.  This is all well good, because the Enterprise in this film was not that impressive. It felt too cartoonish ( And they seem to always change the look of warp speed in every movie, which I really don’t like)

Based on the End Credits this seems like the smallest cast of the reboot movies.

It’s so sad that Anton Yelchin past away, and even sadder after seeing this movie. Pavel Chekov was a big part of Star Trek Beyond,  far bigger than he was in the other two movies. I’m glad they made the time to dedicate the movie to him  (As well as being in memory of Leonard Nimoy). The world lost out on a great actor.

Not surprising, Simon Pegg got to show off that Mr. Scott was more than just an Engineer (That’s what happens when you co-write the film). Not that his role in the other two films were not big and important, but Scotty gets to get out of the engine room and more into the field of action.

New Character,  Jaylah was a cool addiction to the Star Trek franchise. She became this quick and perfectly done homage to what the whole purpose of Star Trek is about. We meet a new alien and it’s all about getting over the culture clash and working together. This happens a few times in the movie, some positive, some not.

Idris Elba is a a perfect Star Trek villain. He does this thing where his grasp of the English language is minimal keeping his bad guy speeches to the point. He’s proof that it takes a great actor to do the work behind all the make up. Is he better than Khan? Is he better than  Cumberbatch’s Kahn? Time can only answer this question as it’s a close call.

Plus Star Trek Beyond gives an impressive effort to be diverse. Not just white guys in alien make up to prove how diverse the Galaxy is, but more different colored faces in the mix to prove how diverse Earth is (That’s right, every man, women and child made it to space this time). In Into Darkness, they showed how natural interracial couples are in the utopian future, and in Beyond they showed us that Same sex marriages exist without making it a big deal (Although the person they pick to show this is a big deal (but no real surprise to any Trekker).

Michael Giacchino still makes the awesome soundtrack for the franchise. I love what he does with it and I’m glad he’s still doing it cause I do love how it adds to making it feel more like an episode, plus this guy’s a boss film composer.

It’s a fun movie that I want to see over and over again. Abrams got Star Trek back in the game and Star Trek beyond has us playing for keeps. The new pace did take some getting use to, and I spotted some small trivial things that raised my eyebrow (What appears like Dr. McCoy’s so-so knowledge of the Vulcan body), but overall, it’s more like Star Trek.

It uses it’s budget to make space bigger and the Galaxy more impressive to watch than making a high octane action movie. The story and how these guys solve their problems is so classic to what the show is about.  It has a top notch villain, and it honors  Gene Roddenberry’s vision of a world united with a little more vast diversity of cast that mirrors what’s happening in the world today.