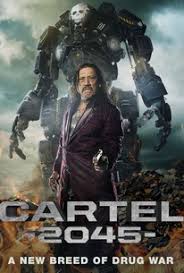 Sometimes I love low budget movies like this. Cartel 2045 is a Sci-Fi picture about a future in which robots are used to fight wars in Afghanistan, but then become surplus for Mexican cartels who use them for their own personal gain.

Wait, that may not be the actual story line for the movie, that maybe what I got from it cause I was half paying attention to the story.

I don’t want to say the story is not important, but I found it vague and it was not what held my attention.

First off, the icon himself Danny Trejo was in the movie doing what he does best: Playing that bad ass villain. supping up his villainy is the fact that he spends a lot of his best moments of the movie delivering Spanglish one-liners to the good guys from a cheaply done CGI Mech suit (that’s right Mech suit. One of the charterers racistly pointed out how anime that was).

The entire movie felt like it was made on a shoe string budget but that does not escape the fact that it was done well with that shoe string. You could tell it was not The Fast and The Furious or even a direct-to-video (Fat) Steven Seagal flick, but I’m giving mad props to the filmmakers for turning the lump of coal they were given into solid gold.