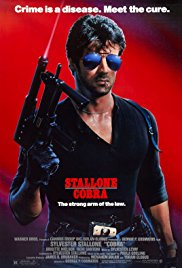 Interesting note I discovered about Cobra is that it was Sylvester Stallone’s answer to Beverly Hills Cop.

You may have known that Beverly Hills Cop was a project with Sly attached to it, but the studio found his concept too expensive for them to film, so Sly dropped out and in walks, comedian Eddie Murphy who would change the game, as the term, Action comedy did not exist before Beverly Hills Cop was release, and the box office smash makes history.

Sly was a pretty big star in the 80s so passing on one movie (Even one that made a quarter of a billion dollars), was not a big deal. Yet it seems that he wanted to prove that Beverly Hills Cop could make money on the original concept of  a straight up action thriller. Though Cobra is based on a book (That’s so fucking weird that an action movie is based on a fucking book. Die Hard was based on a book too, but then again, Die Hard is a lot smarter than this (not that much smarter but…). Much of what Sly wanted to do with Beverly Hills Cop is in this film. Fascinating.

Watching this movie trying to figure out why exactly do they need Cobra to come in and handle the bad guy in this opening scene? What is he really doing that no other trigger happy cop could not do? Was it his cool shades? Was it the cool gun with the cobra on it? Was it the car? 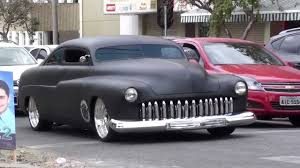 It’s the car! Makes the movie worth wild

Sylvester Stallone plays Cobra, the baddest cop on the block who plays by his own rules. Why would I want a cop who plays by his own rules? That sounds like a cop that would put 41 bullets into a random black teen with a hood on, but as it turns out there is a killer on the loose and trying to catch this guy using the laws of the land is not working, so the police department has some guy on their payroll purposely to break the rules?

Sure, it doesn’t make sense, action movies don’t need to do that, but the overboard style over substance that is Cobra makes the thin plot stand out.  Cobra also goes very over the top with all the top action cliches, like instead of having one cop boss screaming down Cobra’s neck he has like three of them, and the movie is about catching a serial killer, who for some reason has an army at his command.

Cobra also stars Brigitte Nielsen who was banging Sly at the time so he put her in a few movies like this one (and Rocky IV). She actually does a pretty good acting job in this, trying her best not to seem taller than Sly (when she is ) and is very convincing as a frighten woman who saw something that would put her in danger (Possible motivation would be that if she makes Sly look bad he would cut her career shorter than expected)

I always had fond memories of how action packed this movie was . Cobra does have some pretty amazing action scenes. Turning the heat up to eleven with some great car chases and gun battles. Well Sly, it’s no Beverly Hills Cop, but it was a good action thriller.

Previous: The Howling (or B-movie version of An American Werewolf in London?)
Next: Future Zone (A sequel better than it’s original (Not a hard accomplishment)