While watching this movie’s predecessor, Future Force, nothing said to me that this was going to have a sequel. However, I did notice a step up in the production value. It still looks like a cheap film, but in comparison to Future Force:

It looks like they paid a dollar for this vest in Future Force. 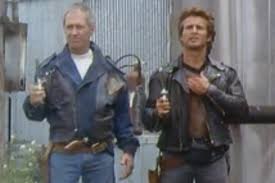 The jacket he has in Future Zone looks like he paid two dollars.

Icon, David Carradine returns as John Tucker, one of those tough as nails, by my own rules street cops whose quick with the trigger (that’s how he makes the big cash), and also has a power glove that can shot electric shocks. 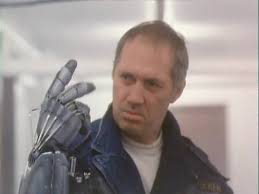 Both movies have a good concept that makes it slightly better. It’s interesting how far (or not so far) into the future the film happens. In 1991 (two years before the first film), crime gets so out of hand that the government decides to outsource Law Enforcement to private companies. Having a movie about the future being set two years from now makes it easy on the budget (know wonder his jacket got better in the second film), It also puts some kick in the grim dystopia, putting it so close to the actual present. Although, I’m going to assume this is why they put a time traveling theme in this sequel cause the cheapness of the not so distant future was not sci-fi enough and they needed to kick it up a notch, without money (All C.O.P.S did have video phones in their cars so I’m sure that was a huge quarter in a dollar).

It’s a future where the C.O.P.S get paid big bucks to stop crime, acting more like bounty hunters than peace keepers. My first though is that a black man would not stand a chance in a society like that, but in reality, in a–“future” where cops fill a quota to make money instead of just keep their jobs being racist is not really where the money’s at, also, it’s a future in which with the right price any drug dealer can legally buy a cop to take care him, but I’m getting off course with the plot of the movie.

Both Future movies are about John Tucker having a big moral campus besides being a corporate law man, and much prefers using his legendary skills to pull in real criminals, only to discover who the real criminals are when his good intentions put him all the wrong side of the law and he gets haunted by his follow officers.

The sub plot was a little too obvious. In the film, a guy name Billy who we see come from the future (assuming that’ where the beam of light was from) , tries to become John Tucker’s best friend, worshiping him like a god, meanwhile John’s girl has something important to tell him, and we discover he’s having a baby before John does. Billy says he comes from 30 years in the future, Billy’s about 30, he knows a lot of small details about tucker (get it)

Future Zone is to Future Force what Deathsport is to Deathrace (not really, they just all have David Carradine in them), the world will go on if you miss this part of Kwai Chang Caine’s career after Kung Fu.