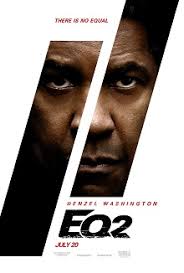 There is no equal when it comes to Denzel.

I’m starting to think that Denzel low key loves action movies and wants to do them. It seems odd that such a heavy hitter like Denzel is a victim of type casting, but it’s true. He’s such a high caliber actor that many would say it’s beneath him to do such a mindless thing as an action movie, but I wouldn’t be surprise if Denzel saw his boy Wesley Snipes in Blade or something and was like “I want to do that”. So when stuff like the Equalizer showcases a fuller acting spectrum for one of the top three actors of all time (The Two others being Myrell Streep and Tom Hanks in my opinion). Mr. Washington jumps on the band wagon.

That first Equalizer was so good. Denzel and director Antoine Fuqua has a masterful combo of action thriller. Something that you don’t want to mess with and try to copy (but you know Hollywood)

However, Lighting strikes twice and it strikes hard. I feel that Equalizer 2 is arguably better than the original film. One of the things that makes it better is how this sequel kinda flushes out how the TV series this movie is based on works. It’s almost like 2002’s Spider-Man vs. Spider-Man 2 type of situation, in which the Spider-Man 2 is considered a better movie because they get to concentrate on the character now that the origin story is out of the way. Although McCall’s life as a spy that’s suppose to be dead makes it hard to reveal anything from his origin in the original film, in the sequel we get to see the character develop when he seeks vengeance for the murder of his closet friend (Played once again by Melessia Leo. they did the same thing in the Olympus has Fallen series with Angela Basset being killed in the second film), at the same time, there are several subplots of McCall just doing his thing, helping random people out who need help.

Denzel is electrifying in this movie. He’s just the type of actor who always gets an emotion out of me, and you never catch Denzel sleepin on his thespian skills.

That’s why Antoine Fuqua has to come correct with this film. Making sure he’s making something more than some action fluff, that it has the substance that’s Denzel approved, making him a sophisticated action hero (Almost better than Liam Neeson)

It’s one of the best sequels ever.

Previous: Scott Pilgrim vs. the World
Next: Unfriended: Dark Web