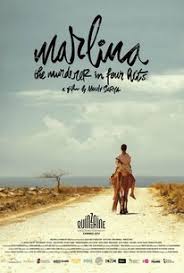 Home » In Theatres » Uncategorized » Marlina the Murderer in Four Acts

It’s definitely a great three out of four acts.

In fact I’m not sure if it needs all four acts.

The four acts go by pretty fast, which is good. It’s like an uncooked Kill Bill as Marlina kills her rapist and the men who he was traveling with who wanted a chance to assault her as well. Then it’s a strange slow burn as Marlina attempts a journey to inform the police of what happen, while avoiding another set of men looking for her attackers.

It’s one of those flicks that has an interesting story line, that your expecting far more action and drama from, but the filmmakers chose to keep a quiet approach possibly to respect the real situation of sexual assault.

Plus it’s done in a different culture other than my own. A contemporary place that co-exist with my place but in so many ways very different than what I know. That really does add to the interesting element of the film.

And I love the pacing of the film. It seems to go slowly but it does not feel like it at all. Perfect!

Previous: Pacific Rim: Uprising
Next: Sinbad and the Minotaur