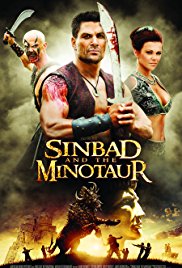 There was a Minotaur in this?

Well I’m thinking differently about the movie after seeing the DVD featurette.

Watching it, the film is blasting with a lot of kinetic flow, which I like, but this flow is moving with no real substance.

All the performances are far two one dimensional and too exaggerated. It’s just not using the energy of the pace right.

On the other hand, after watching the commentary for this picture I do feel a soft spot for low budget filmmakers trying to make a film on the Sci-Fi Channels schedule.

It could be that if I watched this  movie the way it was met to be seen, on cable TV with commercial breaks, it may allow me a more fair rating of the film.

But I doubt it. Everything about this film tells me it was a waste of time and I would probability for I even seen it tomorrow.

Previous: Marlina the Murderer in Four Acts
Next: The Yellow Birds