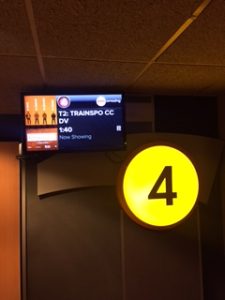 My mistake I thought I was going to see another Terminator movie.

Just joking, and I think it’s pretty funny that director, Danny Boyle actually used that for the title of this sequel.

It’s an OK movie. Don’t really need to see the first one to like the second one, as it’s about four people reconnecting with each other after twenty years, and most of the story’s content is like that. Although, most of the plot does revolve around what happen in the original movie and is implemented with the idea that you did see the first one as Mark stupidly returns to his old stomping grounds knowing he stole money from his “mates”(As they say across the pond) and you can only imagine what happen afterwards.

The Franco character was the most interesting to catch up with. Despite spending most of his time in jail since the last movie, he seemed to have the most interesting situation to come back to, with a wife who did not truly miss him and a son who’s becoming a man far different than the one he is as Franco has the same mentality he had when he got locked up, that no longer fits.

When we last left Mark, it seemed like he was going to do something more with his life, but as it turned out that was not the case as he has some what of a mid-life crisis when he realized his life sucks.

While Sick Boy (Now preferring Simon) and Spud seem to be stuck where they were Twenty Years ago (It happens, especially when drugs are in the mix).

T2 does not seem as lively as the originally, but in many ways this makes perfect sense, as the movie is all about getting older, and the type of person you are in your Twenties vs. who your are later in life.

It has it’s amusing moments, but it does make me question weather Danny Boyle made this sequel simply for nostalgia reasons. He does not seem like that type of filmmaker, yet this movie falls into the great sequel trap as I felt not enough has changed in the past twenty years and I was expecting more.

Although I did like how the film making was done to reflected how these characters have not changed. Using a lot of camera angles and other tricks Boyle did in the very first movie.

I like the first movie, but not that much to really care about T2, but it did make me wonder what would happen next to these guys. For those of you who did love the original that much, I think you are in for a little bit of a let down.

Previous: Beauty and the Beast
Next: Hugo