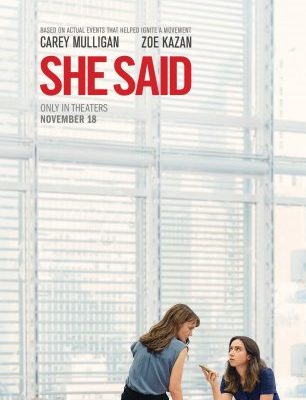 Investigative reporting has become a genre.

I was expecting a movie about the MeToo movement, which She Said is very much so about. I was a little worried because this is the second movie, following The Assistant in which Harvey Weinstein plays the main villain. I have no problem with this other than the fact that he’s a hot topic and the best example of what’s wrong in Hollywood, but we don’t want it to be all about him.

My biggest takeaway is that this is a movie about investigative Journalism, similar to Spotlight, which I believe is also a movie about how real journalist took on a story that could have destroyed them. You could say that the movie is propaganda for the heroism of Journalism with the egoism being overshadowed by the fact that they are indeed doing an expose on a very important matter.

If you like movies on how Journalism works, this is a good one about turning rumors into fact (something that’s hard to do in the days of the internet) going down the rabbit holes of curiosity to get people to talk to you about things they will not or cannot talk about.  Done in the most real way possible as we get little background titbits about who these journalists are and how they work as a team with a realistic respect that you don’t get from movies.

No bosses screaming at their employees about what they can say or not say. Plus, like Spotlight I got some insight about the mechanics of Journalism. Like the procedure of how tow Journalist c0-write a story.

I will say the claimless of the film did have me get a little drowsy. I like the realness, but I do believe they could have picked up the pace in a few places.

Overall, it was an ok watch.

Previous: Bones and All
Next: Emancipation