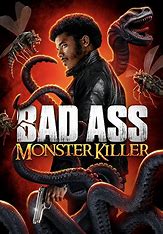 Makes me question how much I actually love the Blaxploitation era.

The Badass Monster hunter Jimmy Chevelle is a one-dimensional character. You can say that about a lot of the Black heroes of the era, but guarantee if you watch this movie, you can see the depth of an architype Ex-football player turned action hero by comparison.

Listening to most of that bad score through the movie was tiresome. It got better as we progressed but its repetitiveness starting off took me out of it.

I’ll give the movie credit for a great art design. Not exactly Sin City but it works in the same fashion. Plus, those monster effects were perfect. In a world where we are so use to CGI it feels cool to see some on-camera effects.

Overall, I don’t see the movie as bad, but it was not interestingly enough to keep my concentrated on it.