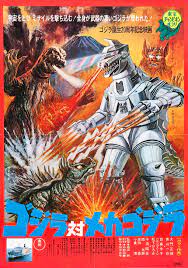 I went to see this in a theater near me on November 3rd which was Godzilla day, celebrating the release of the originally movie 68 years ago. I had my choice of seeing the original but I saw that and Gojira a bunch of times. I also could have saw Godzilla against Mecha Godzilla which is actually a different film altogether, but I went for this because I am told that the Godzilla franchise of the 70s was the best run.

This film is beautifully campy. There is nothing like watching a dude in a cheap costume “dance” around crushing miniatures and shooting fireworks from his mouth (somewhat). I miss the look and feel of partial effects sometimes, and despite the cheap special effects of today being far superior to those of yesteryear, for contemporary times, that 70s look makes for a fun picture to watch.

Obviously, I cannot expect much for an English dub of a franchise met to attract children. (Their use of the term “space titanium” was a little too dumb for me). I must admit the plot was very cleaver, particular for me as someone who knew enough about Godzilla to see a slight brilliance in the origin of Mecha Godzilla in certain places in the film.

However, that is definitely a fan thing. The best thing about this movie was just the epic battles between Godzilla and his foes. If it is about anything, it is about the fun in that.

Previous: Hell on the Border (2019)
Next: Green Lantern: Beware my Power