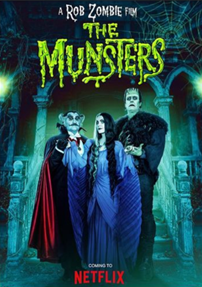 Huge fan of the rock star Rob Zombie that I’ve been a fan of his filmmaking sense House of a thousand Corpses, but this Munsters remake has got me questioning my fandom.

Have you ever surfed though the large amount of content Amazon has and came across a low budget b-movie that looks like some dude wanted to make a movie and got his friends to work for free on a budget less than five figures? That’s exactly what The Munsters looks like, and at this level all it does is poke holes at Zombie’s style of filmmaking.

What I think is sadder is not the fact that Universal did not seem to have enough faith in Zombie to give him a budget needed to truly do what needed to be done to make this a decent film, it’s the fact that Universal seem to not have enough faith in the Munsters as a franchise to give Zombie the bread needed to make this a descent film. I think as a franchise Herman, Lily, Eddie, Marilyn and Grandpa should have been given more respect than this straight to DVD nonsense.

Well, it was not all bad. Interesting enough I like the work of Zombie’s reoccurring ac, Richard Drake and his wife Sherri Moon. They just stood out as capable of doing the best with what they were given. Sherri proving that being the director’s wife was a small part in her getting the part and Drake proving that he is a scene steeling actor.

Zombie should have nailed this because his almost 40-year music career was leading up to this moment (I mean, the Dragula was not even a fixture), yet the ball was fumbled. I like Zombie enough not to blame him but blame it on the lack of backing from the studio.