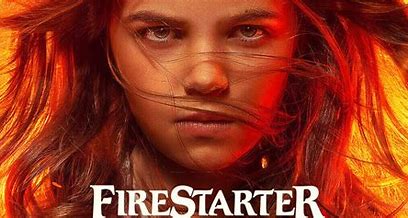 I feel like that Prodigy song should have been all over this movie.

So today I revealed my love of movie reviewing to a friend (kicking up my viewership to three people), and he inspired me to be more focus on certain things I tried to be on the blog. I think I’m going to start giving more of myself now liked I did early on this blog. So here goes.

So, I went to go see Firestarter this week. Lately I had the honor of having a crew of like one of two movie fans (mostly one) join me at the cinema. We usually go see the big stuff but really the big stuff is all that’s being shown in theatres these days. After watching Dr. Strange and the multiverse of madness we were pondering what to see next. Then I remembered Firestarter was coming out this week and I suggested we make this an outing, even though I knew this was a movie I should have gone to see alone.

Cause you see Martin Scorsese is right when he says that those Marvels Movies are a ride and when you are own a ride it can be more fun if you are on the ride with other people. Firestarter is definitely not a ride. I almost instantly regretting asking my boy if he wanted to tag along.

Obviously, a movie can be good (cross fingers) and a movie can be bad. What is should never be is boring and Firestarter was bland. From the jump it was moving too slow, which is only a problem when you watch a movie that from the jump you realize you’re not going to care anything about. It felt like a drawed out art film that went nowhere and I got no satisfaction from it.

Zac Efron tries to be a stand-up actor in the flick even though there was a seen where we just had to see his abs. Zac was actually not bad in the flick. He plays the Firestarter’s dad and there were these scenes where he’s fighting with the Firestarter’s mom about how to raise the Firestarter, and they are pretty believable. I can really get into them. if only there was more of it in the movie. Enough for me to get to care for the characters.

It’s a bit offsetting that Zac (at least for me) is the big name in the picture. As someone who saw the 1984 film based on the same Steven King Story it was off centered that I was unfamiliar with who was playing the title character in this when the first movie adaption was all about Drew Barrymore being the character. At least if the Firestarter was played by someone more famous that would give me some attraction to her that I did not get.

While Firestarter seem to have all the pieces of the puzzle on the table, they did not fit in quite right for me to take interest of what I’m seeing. It could have been a great movie but it felt like a waste of time.

It’s funny too, cause after me and my friend saw the movie, we barely talked about it like we always do after seeing something. instead reverting back to the Multiverse of Madness which we saw last week as we had more to say about what we dislike about that film then we did about anything about Firestarter. That’s a bad sign.

Previous: Doctor Strange in the Multiverse of Madness
Next: Happening