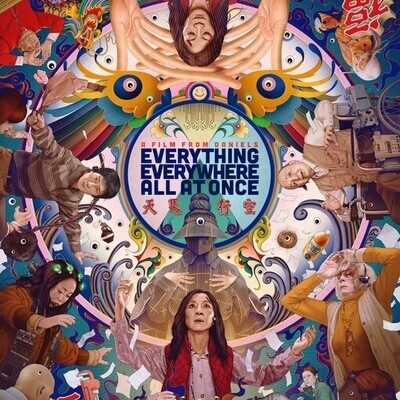 Home » comedy » Drama » Sci-Fi » Everything Everywhere All at Once

What a perfect title for this movie.
It was everything everywhere all at once. Sometimes too many things, too many places at once and you can get lost, but it helps to focus on things.
Obviously, the amazing Michelle Yeoh is one thing to focus on. The whole reason I myself came to see this flick in the first place. Much as this movie gives you to absorb it was easy to keep my eyes on the beautiful Yeoh.
Oh, and the kid from Indiana Jones and the Temple of Doom is in this flick. He’s older odiously but he still sounds like the kid form The Goonies. How lucky he was he got to play Yeoh’s baby daddy in this joint.
Last and definitely not least it was good to see James Wong in this film. You could tell they most likely made some filming adjustments to assure the 90 something year old actor can do the role but that’s what you do when you have legends do your flick.
Speaking of legends, almost forgot about Jamie lee Curtis who seem like she was having fun in her role.
The fact that this movie is about a multiverse I low key was expecting a multiverse connection between who Yeoh plays in this movie, and her character in Shang shi.
It’s interesting that this like the third movie that came out in March that’s about the mommy daughter relationship between Asian women. What’s even more interesting is how they go in order. Turning Red is about a 13-year-old and Her mom, Umma is about an 18-year-old and her mom and the girl playing Yeoh’s daughter looks like she’s possibly in her early 20s. Don’t know when this became a hot plot in movies, but I will admit I prefer how the story lays out here (but only because I relate more to an Asian woman in her 20s over a middle schooler)
The music in this film is great. The movie was filmed in the context that the story is about a laundromat owner in her mid-life dealing with where she came from and where she’s going, but the music actually fits perfectly into the ideal of this woman being the key to saving the multiverse and it made for a lot of the entertainment. Just these big orchestra cues that make it sound like I’m watching Dune contradicting, the image of Yeoh being a worn-out blue-collar mom. Spectacular!
I say it’s good. It’s all over the place and it can be a handle to process, but it has a good cast to concentrate on.

Previous: F/X 2
Next: The Bad Guys