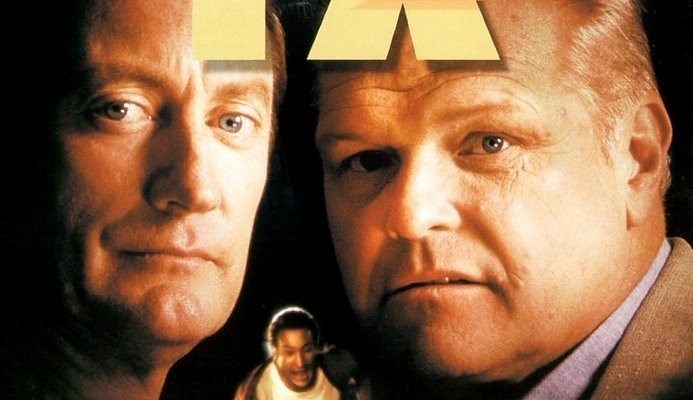 I feel like I felt like F/X 2 was just a title, like Cosby’s godawful Lenard part 6. When I was kid, I remember F/X 2 was promoted a lot on TV. In the movie there is this really cool gadget of an automated clown that I think they hoped would get people to see the movie.

F/X 2 as a promo felt like one of those Fake Trailers from the Movie Grindhouse, someone paying homage to movie Genres.

As a flick, F/X 2 is actually the perfect sequel, which makes senses cause there is an F/X and it’s a good movie, a movie I don’t think was that successful but they made this movie as if though it was. Everything that F/X was only more of it. I said F/X may have not had enough action, so they put more action in it. I say F/X did not have enough scenes with Bryan Brown and Brain Dennehy working together, so they added that (Good idea because the literal 6 mins of screen time they had together at the end of F/X showed they had chemistry so let’s see if we can make a movie with that, right?). I also, would say there was not enough special effects in a movie called F/X so of course they made the F/X in F/X 2, bigger and added so much more.

Bryain Brown must have been a sex symbol in the 80s (milking that Aussie explosion we were having in the 80s). in F/X he spent too much time in his undies, showing off looks that seem average to me but I’m not a woman. In F/X two he had some shirtless moments (and its funny cause in those moments you could tell, he was not the same sex symbol as he may have been in the past (I could be wrong).

Brown returns as Rollie Tyler, once a special effects artist now a toy maker with a hotter girlfriend in this movie than the one who took a bullet for him in the last movie, but she comes with baggage in the form of a little boy whose cop father ask him to do an Effects like favor for him (like he did for the Justice department in the first film)and the dad ends up getting killed for it, so he needs to call on his old cop friend to help him out.

Brain Dennehy age a lot in the 5 years snice F/X, but I’m not judging. I just realized that in F/X he had great hair and a cool mustache, and he has neither in F/X 2, but he does make up for it with far more charismatic charm, so we are even.

Dennehy returns as Leo, a now retired cop who seemed to spend his “retirement money” from the first flick on owning his own bar that he keeps all for himself. Leo uses his connections to the force to help his bud out.

Together, Bryan and Brian are doing a buddy cop film despite neither one actually being cops (but you can tell by that Lalo Schifrin score which feels like a rip off of what Eric Clapton was doing for Lethal Weapon. Bryian and Brain are not Riggs and Murtaugh, but they put up a good fight for that slot.

With Leo comes the return of Velez, the only other character form the original film to return. She’s a good desk cop who’s great with computers and seems to have a thing for Leo (which sucks for her in the worse possible way).

Just from a Filming perspective, F/X was a movie that felt like it had more depth to it, while F/X 2 was a more action-packed fluff. Not in any way a negative judgement on my part because F/X 2 was your typical sequel because of it

Previous: F/X
Next: Everything Everywhere All at Once