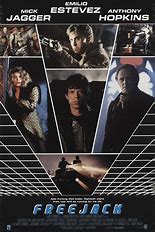 I remember how obsessed I was with this movie as a kid. The trailer looked amazing and I figured Mick Jagger of the Rolling Stones decided to do it so how bad could it possibly be?

I did not get to see it when it was in theatres, I caught it sometime after on cable. I saw it come and go from the theatres, and I see why that happen.

In all honestly, for me the movie is not that bad, just not as good as the trailer made it out to be (that’s always the way). I had built up the best futuristic movie of all time in my head and then I saw the movie and realized it was not that by a long shot but watching it now, I really like it for what it is, not what I expected it to be.

Afterall, in this day and age, (even by 2009’s standards (this is the future timeline the movie takes place in) I can totally believe the idea that the richest man in the world has a personal time machine that he plans on using to pull a man from another time who died in an explosion and download himself into his body after his original body fails on him. Although I will say that unlike the movie the culture, we live it would consider that greatly wrong, so he would have to find a man that looks enough like him to pass for a bastard son. That should not be a problem for a man with a billion dollars, right?

Any who, Freejack is a perfect example of Futuristic Sci-Fi coming from the late 80s early 90s. Looks a lot like Highlander 2 the quickening and Cyborg, all coming out at the same time. If you see one you’ve seen it all and I wish I could say one was better than the other, but that’s not the case. If you need to see one, I can only say Highlander 2 is on the bottom of the list and it’s just a matter of how much you like Jean Claude Van Damme over Emilo Estevez.

Previous: For the Love of Money
Next: Being the Ricardos