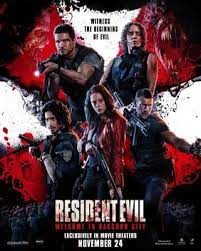 What is it about movies set in the 90s getting 90s music all wrong? Maybe it’s all movies when it comes to the decades and I just happen to notice that if the movie is set in 1998, they would be listening to Puff Daddy, Limp Bizkit and the Prodigy or something, but instead they are jiving to the Cranberries and 4 Non-Blondes which is more mid-90s. Maybe it’s a license thing?

Resident Evil also has a retro filmmaking style but it goes a little further back to the 70s and 80s with cinematography that reminds me of Eastern European horror films of the era, which really adds to the feel of the movie. It did not make it scarier (or scary at all), it gave it a different feel to the rest of the Resident Evil films in the franchise.

I barely felt like we got a story from this movie. Its really thin unless you are ether familiar with the games or the films, but I must say I really like how the movie looks and it makes up a lot for a story that barely pushes anything along and very one-dimensional characters. Not at one point did I really care what happen to these people, no suspense at all.

Yet for all its flaws, I still like it. It plays a lot on the nostalgia of the games and horror cinema. That worked on me.

Previous: Clifford
Next: House of Gucci