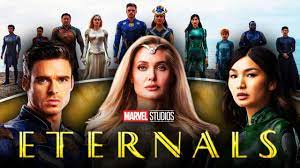 It is a satisfying movie.

I am still waiting for that X-Men movie man.

Not too familiar with the Eternals, which is why going into this I was thinking they were like mutants, the same way the Inhumans are like humans. With that said, like the Inhumans, the Eternals cannot beat what Charles Xavier and his misfit crew put together.

The Eternals do try too hard to stand-alone. I am looking for a lot of references to the Marvel Cinematic Universe, I did not get enough for my taste at all. Realistically, this is why I go to the theatre to see these movies.

As a standalone, movie it was not half bad. It had a fantasy like story with many cool characters played by good actors. I did like how complex a lot of the characters were. I felt that the Eternals moved away a lot from the superhero genre, nothing in the movie is as cut and dry as most of these Superhero movies are when it comes to the main characters being heroes.

Because of this, once again a marvel movie is missing a good villain. They could have used one. As cool, as the characters are they did a lot of talking. Some of the characters like Kingo and Phastos were interesting enough to want to hear their story. I wish this held true for everyone, but it did not. Plus, all the talking made for too many moments where I forgot what the purpose of their mission is.

I am impressed with the visuals, especially the Celestials (who keep changing with every movie they appear in, right?). They were impressively big seeing them on the big screen. I do not know if this was Chole Zhao’s first rodeo when it comes to special effects but she definitely did not fall intio the same mistakes that the Russo brothers and Ryan Coolger mad on their first marvel movie outing.

That is about it, however. It was not enough of a marvel movie to watch it on the big screen like the others with other people as into it as I am (cause no one else seem to be). I’m glad I saw it on the big screen cause the visuals were impressive but we are getting to the point in which I don’t know who these marvel superheroes are and its changing my interest (Although in fairness I had no idea who the Guardians of the Galaxy where before seeing the movie and they won me over far better).

Previous: Paranormal activity; Next of kin
Next: Prometheus