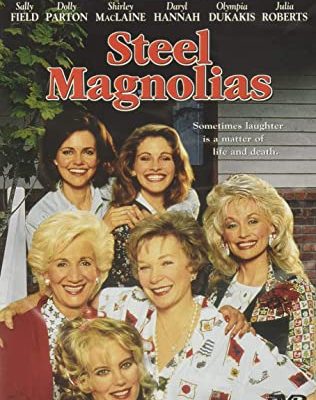 So I watched Steel Magnolias back to back with Terms of Endearment. what was it about these chick flicks of the 1980s being a light hearted comedy with the most tragic deaths? I think this was just a way for white women in hollywood to get attention or something.

Chick flick maybe an improper term for what Steel Magnolias is. It does not feel like a movie I would be force by my girlfriend to see. It feels like a movie my mom would love (metaphorically, this shit is not up my mother’s ally (my grandma would love it).

Then again, I’m actually pretty old. Old enough to have a mature woman who would cry over a bunch of older women bonding like family over the death of one of them.

I won’t lie, the part where the great ensemble cast of white women are bonding (which happens a lot in the flick) does make me misty eyed (honestly unless someone physically hurts me i don’t cry). It really was a really good cast of characters too: love the chemistry between Shirley McClain and Olympia Dukakis. Loved Darah Hannah in this movie, and wow Julia Roberts wowed in an early role. Also love watching Dolly Parton in movies.

Steel Magnolias was worth seeing…once