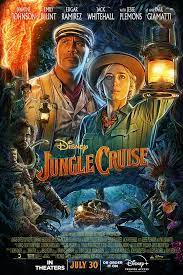 Started out as trash but became something better than I expected.

I love Dwayne Johnson but he does do a lot of questionable movies knowing, to quote the Rock, that “it doesn’t matter!” The movie could look stupid and I’ll go see it the watch the People’s Movie Star. This was one of those movies, or rather it starts that way but there is a point for me when everything gels and suddenly it becomes a movie worth seeing.

The chemistry between DJ and Emily Blunt was typical, but Jessie’s Plemons and Edgar Ramirez we’re good villains.

If this is Disney’s next effort to make a ride or attraction into a movie franchise this was indeed not Pirates of the Caribbean. Way better than the Rock’s first attempt at adapting a Disney World attraction, Return to witch mountain, but not Pirates.

However, it is a great adventure movie that i really enjoyed.

Previous: Jolt
Next: Escape from Mogadishu