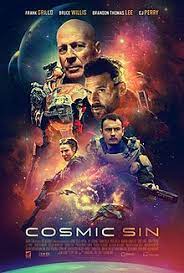 Bruce Willis does this sometimes, it’s one of those cheap flicks in which they spend a lot of money to have Mr. Willis spend 10,mins in the movie so they can put him on the poster and say Bruce Willis is in the movie, so that…Die Hard fans like myself will check it out.

I’m hip to the con and sometimes it leads to a good movie. In this case I at least thought I would get Frank Grillo as the actual star of the movie but as it turns out he’s also phoning this one with Willis. Guest he can do that after making that money In the Marvel Cinematic Universe flicks.

The movie has a complex plot about survival of the fittest on an interstellar level, which was pretty much wrapped up in the trailer of the film and never really goes any further.

I would love to tell you how action packed this film is but that falls short as well. It feels set up to be fluffed with action but its all lame .

The only thing I truly got a kick out of was the cheap Sci-fi. You could tell they were trying to turn 20 bucks into 200 million, but sometimes those failures can give a movie charm. They had some visual effects scenes that were filmed perfectly and some of the costumes were so stylish i could not keep my eyes off of them (Making it easier to see all their flaws)

If you want a really good Bruce Willis is just on the poster movie checkout Extraction, it’s perfect. I would leave this one alone.