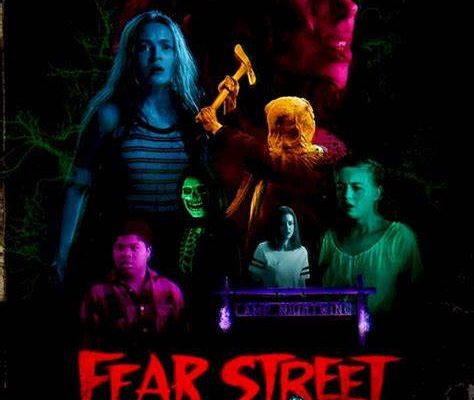 I was looking forward to this because I’m not only familiar with the book series but I read a few. It was not the first book I ever read but I think it was the first that did not have a title that started Little Miss or rhymed Cat with Hat.

Any skepticism I had for the movie slowly disappeared with the first death that proved this was going to be a real horror movie.

I was a little afraid with the constant 90s references made with the musical score. It’s called Fear Street 1994 but I’m guessing they were not expecting people who were the age of the demographic for this flick in 1994 to be watching it, even though these books go back to like 1989 or something right? Some of the musical choices had not even happen in 1994 and when that happen I could not help to raise an eye brown cause the movie is trying to set a place in time with the music alone and being annoyingly vague on the 90s.

I assume this is a small pet peeve just for me and maybe others who where teens in the 90s, After all, when the second movie 1978 comes out I’m not gonna care about this.

It’s a small pet peeve in comparison to the overall movie which was a great horror film. What it has going for it is that you start to care for the victims, which as disturbing as it sounds makes the death scenes even better.

Fear Street was able give you everything you’d expect from a Slasher movie and then add some depth to it that I thought I would not get from this film but they gave it to me.