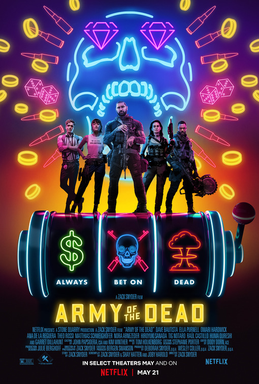 If your movie is over two hours, you’re making a bold statement of how…good that movie is.

Big Zack Snyder has a lot of nerve making a two hour and thirty-minute Zombie movie. I do not care how mainstream the zombie genre got, its still b-movie horror and you take a huge risk in messing it all up for every minute after 90, but as we all know Snyder is a bold filmmaker and his follow up the Dawn of the Dead remake (but not really) is worth the extra minutes.

Army of the dead is a sequel onto itself with the opening sequence telling its own Zombie apocalypse story (a rare one as it tells an origin of how the apocalypse got started) then goes into a new story in which the great actor, Dave Bautista leads a small group into a Las Vegas that has become a barricaded undead zone to be nuked in a day, which only gives them that much time to take 200 million tax free dollars from a vault under a Vegas Casino (owned by the guy who plays Scorpion in the Mortal Kombat remake)

See that’s what’s so great about Zombie movies. Army of the Dead uses the Zombie apocalypse as a backdrop for a heist. Although Army of the Dead does do some deep diving into the mythos of this monster, attempting to give it more character. I like the movie overall but I’m curious for the Zombie purist cause Snyder is taking it so above and beyond I raise an eyebrow to say weather this is an actual Zombie movie.

Whatever it is or not it’s a good watch. Bautista did a lot of whining about what a good actor he is while doing promos for this, and yes it’s true, he can hold a line but we also go to see the former Pro Wrestler do what he was first known for in this flick and that made it worth watching.

An odd choice of flick for the tail end of a pandemic but would have been worth seeing in a theatre with a bunch of other people.

Previous: Sorceress
Next: The Conjuring: The Devil Made Me Do It(2021)