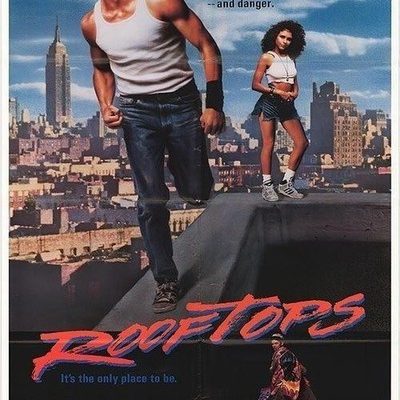 Rooftops is one of those movies that I saw in the movie theatre as a kid and for some reason I thought was worth watching again.

I remember the second time I saw Rooftops. Back when cable was a thing worth having it was on ShowTime at 3 in the morning. I literally was excited to stay up to watch it. then as I watched it I feel asleep on it, but at least I noted why I felt that it was worth trying to stay up late to watch a movie I have not seen in 20 years.

First off, it’s a movie set in New York, and when I say set in New York I mean it was filmed in the city. Not a rare thing but the movie gives focus on making New York a character and I’m a sucker for that. I love watching old movies about New York. they are a show case of how much the city has change yet it’s still recognizable (Plus these days it’s good to see the World Trade Center standing tall.)

Second, the movie has capoeira in it. The first time I saw the movie I would have no idea how much I would; love the martial art, Only The Strong showed me that, but to think that one of the reason I was hanging on to the memory of the movie is because of a subconscious love of a martial art I was unaware of is really cool to me.

Rooftops was apparently made by the same people who made the hit film Flash dance. that’s easy to spot. it really feels like they are trying to take the mafic of Flashdance and fit into something that it can’t. I would assume that director Robert Wise either herd about breakdance fighting or seen capoeira and though it was cool and wanted to make a flick about it,

Rooftops is a movie about a group of runaways somewhere in Alphabet City. they used that era’s abandon buildings and make homes and a culture on the Rooftops of those abandon buildings. sounds cool, possibly was the coolest when I was eight and thought my 1st apartment could totally be a tree house.  In fairness, some of these kids have some real fucked up lives so much that living on top of an abandon building really does seem like a deluxe apartment in the sky

The kids of these Rooftops are young and sexy and use breakdance fighting to settle their conflict (I just busted a gut laughing saying it out loud).  One of these kids, T who’s already being played as the Breakdance fighter master is introduced by his little friend Squeak to a fighting form from Brail very familiar to what he’s doing, and of course he uses it the stop the main antagonist. I think the main plot is about a drug dealer taking over the Rooftops but I did not care.

To me rooftops feels like a Broadway musical trying to be adapted to the movie screen. I’m very grateful that this is not the case cause to have to sit through this with added musical numbers? (Although for real, If the musical numbers what all capoeira chants that may work). It tries so hard to make having a hard knock life and living on the street look romantic and I’m not going to lie, the little boy who saw this in a movie theatre fell for the romance but as a man this movie no longer has that power.

I’ll say this about Rooftops I’ll give it that so bad its good label because I am fully entertained by what junk it is. It’s hits every cliché in the corniest way possible.