This is the start of the film series being more imaginative. Kruger was very creative in killing the very artistic teenagers who dreamed about him.
Ironically, this is also the point in the series that made it start to suck, as Freddy Kruger stop being the true bad guy and became the protagonist, technically not in the movie, but we started to root for Kruger the more creative he got killing these kids in his dreams.
Dream warriors once again connects the Freddy movies (part two always seems so different than the rest of the series. Not like Season of the Which was different from the rest of the Halloween franchise. Just a little off).
In this movie, Freddy basically finds a kid named Kristen 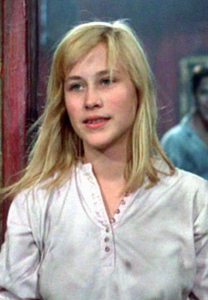 The encounter gets her put into a psycho ward for suicidal kids where she meets kids who Freddy is trying to kill as they are the very last batch of kids who are the spawns of those who burned him him alive when Kruger was just a normal child murderer.

Now comes the return of  Nancy, the  final girl from the original . I feel like Heather Langenkamp‘s career as a scream queen was not as legendary as Jamie Lee Curtis, despite her slasher becoming as legendary. She’s just as cute Curtis.

But definitely not as sexy. Definitely!

Langenkamp could not get roles as sweet as Trading Places, instead she was a supporting actor on the series Just the Ten of Us (Real quick: it’s a spin off of the TV series Growing Pains about a High School coach who somehow got his wife to agree to have 8 bodies come out of her wha wha, In which Langenkamp played on of these bodies.).

I wonder how much time has actually past from part one and part three? In the world of  Jason five years have past between part one and part two which are only a year apart, which is why when we get to Jason Takes Manhattan that comes out in 89, it’s actually 2002 in the world. Technically the plot of this movie would suggest that it at least takes place one year ahead of the actually year it comes out.

Anyway, Nancy becomes the only adult who knows what’s going on with the kids fully. Such adults as Lawrence Fishburne. 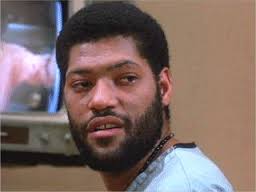 Back when he was Larry Fishburne

“Larry” plays an orderly who cares for the kids (And of course one day because the great Morpheus, a dude who could totally take on Kruger (I mean what is the big difference between the Matrix and a dream, right?)

Craig Wasson, who took a step down from his starring role in De Palma’s  Body Double for a role in this, 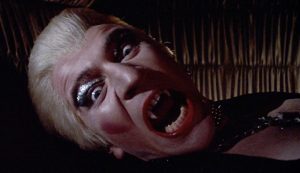 I’m coming for you Freddy!

Wasson plays a fellow doctor who Fancy’s Nancy( See what I did?), and even though he’s an adult he has  open eyes as he was seeing things while awake himself (Far better than the original adults in the original movie who took the I’m right and your wrong approach even though their kids were drooping off like flies)
With A Nightmare on Elm Street 3 the movies stop getting scary (Although I’ve never been as scared of Freddy as I have been of let’s say Jason, as I always felt I was strong enough in the dream world to defeat Freddy (at least I hope so).

The amazing visual effects and comic timing of Robert England made you totally want to see Freddy kill every single teenager.
It’s too bad, because the dream warriors where a bunch of really cool kids and not the usually jerk offs that type cast slasher movies. The dream warriors worked a lot like a sci-if fantasy action movie with these kids battling Freddy using the powers they gain In Their dreams: One was a great wizard. One was super strong. One was a great gymnast. Etc etc.

They all went in like…Warriors (of course some did not make it, but hey that’s war).  The Dream Warriors were the type of kids you should root for the win because they were all very likable, which is interesting because kids in the situation of being at a psych ward are usually stand offish and I never got that feeling from them ever, but that does make sense because it was Freddy that was making them seem suicidal.

But no matter how likeable the dream warriors where Freddy was more collier, as the special effects wizards just made each death better and better to watch.

You’ll have your fav. From Freddy using a kid like a puppet from how Freddy comes out of a tv to kill a kid.

I should mention one death in which a girl who was in the ward cause she Od’d on drugs was cleverly killed by Freddy when he stuck her in her track marks with needle fingers filled with dope. If you think about the whole thing especially as she screams the final scream it’s kinda hunting and disturbing. I think that was the point of all the deaths as Freddy reached into their minds used what they love to lore them in than killed them with the nightmare side of the coin, but only that one really worked on me as horrifying.

We also learned even more background story on Kruger that would become a staple in the rest of the franchise. Past Kruger being one generation’s boogie man with a catchy bursary rhyme the kids on one street sing (only to find out as teens that Kruger was killed by your parents cause he like small children in that non Mister Rogers way (it’s was more of a Ronald MacDonald way)
Now we discover that Kruger in the words of lady Gaga was born this way. Being the son of a thousand maniacs when his nun of a mom was raped a hundred times and a lil Freddy was the result.

A Nightmare From Elm Street 3 holds a special place for me in my movie loving experience and for me it a nice progression in the elm street movies and also holds up to this day.

Previous: A Nightmare on Elm Street
Next: Waist Deep