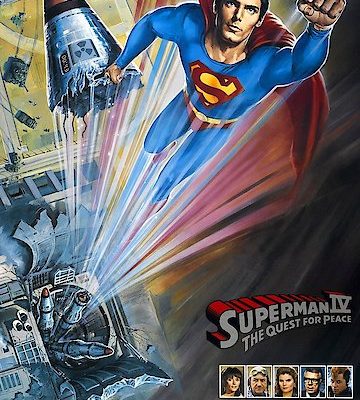 I can see why they stop making them.

It was a great idea by Christopher Reeve. The concept that Superman has what it takes to end nuclear combat is perfect. It makes sense, why would he not do that? Actually there are a lot of moral and political reasons for him not to step in but the idea is still sound that at some point the Man of Steel would at least try to make this happen. He’s Superman.

The semi sub plot is great too. Lex Luther returns to make a “Nuclear Man” powerful enough to hurt Superman. I’m a little conflicted on the Science though. He’s a man made of nuclear energy, but he was birth by the sun. The nuclear energy allows him to cut Superman but the sun being a big nuclear reactor technically means this guy is also making the Man of Steel more powerful, right?

Just like everything else I’m seeing from these Superman movies, ironically by todays standards these movies have little action and are very character driven. A lot of dialog about Superman’s debate on weather he’s a visitor or is Earth his home and what obligations to the human race does that give him. His relationship with Lois Lane, which shown here is a deeper love that goes beyond romance. More so than any of the movies it’s about Clark Kent, his job at the Daily Planet and a possible new romance with the daughter of the new owner of the Daily Planet.

It’s too bad Gene Hackman’s performance as Lex Luthor is very dated sense it revolves so greatly around it’s cartoonish like villainy and extends to his nephew played by Jon Cryer.

Nuclear Man did not suffer from this much. With he exception of  the costume, the quiet one lining Dolph Lundgren should have been was and still is perfect. I Think this character was made for the movie but I wonder if he ever got a moment to be adapted for the comics? One of the one things in this movie I loved as a kid and held up to adult hood. He made this the most comic book of these Superman movies (ironically, that could have been a big reason why it did not do well back in 87)

Possibly the worse thing about Quest for Peace is the specials effects. It’s funny, as far as special effects go they are not that bad. The problem is they don’t hold up to a standard that the other films had. Flawlessly, Superman I, II, and III made us believe that a man could fly. For this movie they watered it down hoping to ride the wave that you already believe so they did not have to prove it here.

In fact, more so than anyone of the other squeals the Quest for Peace is milking it by recycling bells and whistles form the other films and copy and pacing them here. Not a bad concept, but the foundation is too week not to see through it.

Don’t feel bad Supes, Batman’s 1st ride into box office gold also ended with a whimper (And the Dark Knight Rises was not the best way to go to end the trilogy). The Man of Steel had a good run.