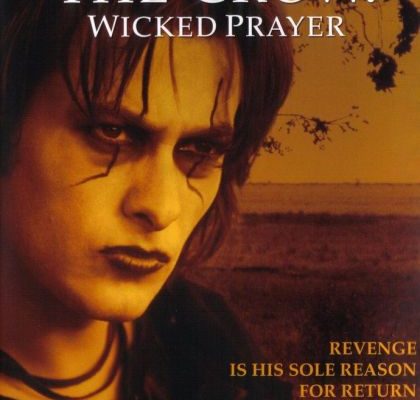 So this movie is real.

I remember hearing about it a long time ago but I thought it was something that was scrapped during production. I’m only familiar with Brandon Lee’s version and it’s Brandon-less (Rest In Peace) sequel City of Angel, which I loved when it came out because it had the Yellow Power Ranger in it. I even caught a few episodes of the TV show  The Crow: Stairway to Heaven. This third installment feels like a myth to me.

I can’t say that Edward Furlong is a bad Crow in comparison. What I can say is that he looks like he got kicked out of the goth rock band that he was in.  I enjoyed the first two movie’s style over this one. Those movies were grim looking , gave off the essence of from a comic book., I never read the Crow comics before but what I did love about the movies is that they reminded me of the comic book Spawn in design.  A lot of the atmosphere from the first two films comes from the fact that they are set in Los Angeles, acting very much like a character of it’s own. Wicked Prayer suffers a little for taking place somewhere else that’s not a city.

I did like how Wicked Prayer pretty much told the origin of how this crow came to be as a part of the linear story rather than a flash back of what happen.

Well all these years and I finally saw it. Now I need to discover id there was an another sequel that stared DMX.