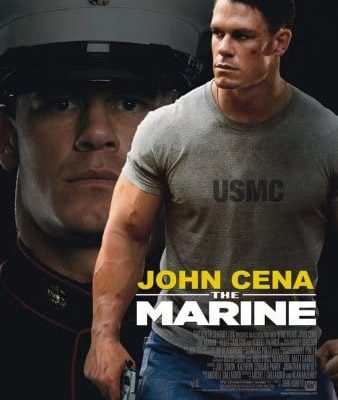 I always loved this movie. Its bloated and completely over the top but it always felt like the perfect adaption of what the WWE does in the ring onto the big screen. Out of the first wave of WWE films (including the Condemned and See No Evil ) this was the perfect archetype of what we should expect.

I saw this movie and was convinced John Cena was going to be the next action star coming out of the WWE after the Rock and his WWE film the Rundown. Form what I understand Cena wanted to be more diverse as an actor which is why his action hero career never really happen. it’s a little sad cause I would have loved to see him in the four squeals that followed, not that I did not love The Miz who did three, four and five, I just wish Igot more Cena in action movies (Then again, might not have gotten Cena in Daddy’s Home and Cockblockers so).

The Marine  can be so overzealous sometimes that it can come off corny and be a turn off. Some of the action scenes are really cool but then they go to far trying to be cool. Robert Patrick is too good of an actor to need to play such a cheesy villain, but was definitely a perfect showcase of what John Cena could do outside the ring.

Previous: We Can Be Heroes
Next: Tenet