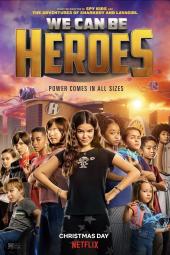 Home » action films » We Can Be Heroes

Was a little unsure if I wanted to watch this. Robert Rodriguez as a director has more hits than misses but in my opinion his attempts to make children’s movies are not the best, and putting Shark Boy and Lava Girl in this universe is not helping.

What is helping is that Pedro Pascal is a part of the cast. Right now he’s 1 for 1 when it comes to 2020s greatest dads (As Baby Yoda’s father a hit but as a dad in Wonder Woman 1984 a miss) but I’m putting the odds in Pascal’s favor.

Like Zoom and Sky High We Can Be Heroes is about the children of superheroes all put in one place. It’s not a school like the other movies but a Bunker that they put these kids when their parents are facing a bad guy that might used the kids as leverage, and like the other films, you have that one kid who does not live up to the expectations of their Super human parent (and fully lives up to the cliché of  the character).

It’s very cute. The superhero genre is a genre that favors children yet We Can Be Heroes is actually made for children. Not just because it stars children and centers around their story, but even the adult Superheroes have really cute powers.

What I really loved about We Can Be Heroes is that the kids all look like they were having fun and that was contiguous, cause I had fun watching them have fun.

Previous: VFW
Next: The Marine