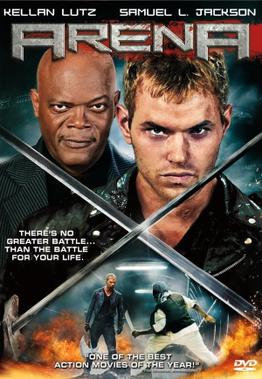 Sometimes I hate it when Samuel L. Jackson plays the bad guy.

In Arena, he plays a rich bitch who basically enslaves men to fight as gladiators in a ring that he can broadcast over the internet for a lot of money. He is really good at playing this role, however. Plus, how many times do you get to see a black man with the kind of power he’s pushing?

I don’t know who Kellan Lutz is. I’ve seen him in more than a few movies in which he gets to stomp it with big dogs (one of my favorite movies is Extraction where Lutz gets to be a leading man in a movie starring Bruce Willis). I’m have no idea where this guy came from and how his background allowed him to get this kind juice but he definitely stars in movies that appeal to me.

Still I am debating on weather Lutz was the right choice for this movie. After all, it’s about a group of fighters being force to battle. We could have got Scott Adkins to be in it and have some cool marshal arts sequences.

The movie advocates more of a street brawl but we did not get enough of that to justify not having this be a Scott Adkins film.

Despite this it’s overall good.

Previous: The One
Next: Attack Force