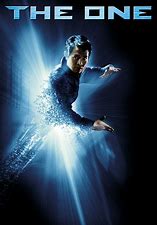 It’s a movie that relies purely on the acting skills and movie star persona of Jet Li. If you like Jet Li for more than his Kung fu skills than you’ll love the one. You have to love more than his Kung fu skills too. It’s an American movie so obviously it’s not the best fighting that Jet Li can do, but it is one of those flicks that shows a more colorful side of Li. A side that America does not get to see a lot of from his best imported kung fu greatness.

Jet Li gets to do a duel role of an, overall good cop, with a great woman and an awesome life until he comes across an evil version of himself from another dimension, looking to be god by killing other versions of himself. It’s like Highlander; there can be only one.

Carla Gugino is always great to look at as Li’s main squeeze in the picture. Delroy Lindo just finished Romeo Must Die with Li, and then there’s Jason Statham, looking like Britain’s version of John McClain with that receding hairline. With that hairline comes a completely different persona of Statham which he’s able to improve thanks to a haircut. Just in time for his breakthrough role in The Transporter.

Coming from the world of Chinese kung fu flicks this special effects driven Sci-fi action flick is not fitting the standard excellence of Jet Li. Not really it’s fault, just once again noting this movie is about a fraction of what Jet Li is skipping out on the full blast of Kung fu you would get from movies like Once Upon a Time in China and My Father is Hero.

Despite always pondering what this movie would have been like with it’s original star  The Rock (ponder no longer. It would have been the most electrifying flick of 2001!), it’s hard to picture anyone but Li in this film as it felt so catered to him, despite a few elements that felt like the filmmakers (of which one is director James Wong) wished he was Jackie Chan, but still very Li at it’s core.

It’s a bit ironic as I felt that the turning of the century had a lot of movies that kinda looked alike (Sci-fi action with Matrix wannabe effects and a Hard Rock soundtrack ( The One being a promo for the band Drowning Pool). It’s sad that The One is not good enough to standout among the duplicates but it is a good watch.