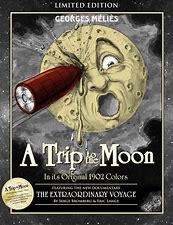 Le Voyage dans la lune is a 1902 French black and white silent science fiction film. The English title is A Trip to the Moon or Voyage to the moon. It is loosely based on two popular novels of the time: Jules Verne’s From the Earth to the Moon and The First Men in the Moon by H. G. Wells, the first, but not last time both books will be adapted.

The film was written and directed by Georges Méliès. Despite the absence of Sci-Fi in French Cinema, A Trip to the Moon is the first science fiction film, It was extremely popular at the time of its release, it is the best-known of the five hundred fantasy films made by Méliès and is considered one of the greatest films of the 20th century.

The films artistic style is visually amazing. However, I can’t get over how inaccurate the science in this movie is. An accomplished magician, Méliès seemed to use more of the dazzling effects of his stage shows. To create a fantasy epic then attempting to create an accurate portrayal of space travel.

A group of astronomers proposes a trip to the Moon. They build a space capsule in the shape of a bullet, and a huge cannon shoots it into space. Their capsule is fired from the cannon with the help of a group of beautiful women in sailor outfits. The Man in the Moon watches the capsule as it approaches, and it hits him in the eye in what is one of the most iconic images in cinema history.

Shooting a man into space using a canon may not seem like the most realistic approach to sending a man to the moon these days but the concept is sound. It’s a very basic explanation of  rocket science  If he were alive at the time Gorge would have gotten a kick out seeing men launched to the moon with…a more powerful canon blast.

On the Moon, the astronauts get out of the capsule and watch the Earth rise in the distance. Afterwards they unroll their blankets and sleep. As they sleep, a comet passes, the Big Dipper appears with human faces peering out of each star, Saturn leans out of a window in his ringed planet, and Phoebe, goddess of the Moon, appears seated in a crescent-moon swing. She calls upon a snowfall that wakens the astronauts. They seek shelter in a cavern and discover giant mushrooms. One astronaut opens his umbrella; it promptly takes root and turns into a giant mushroom itself.

Around this point the movie starts to become the best piece of artwork I’ve ever seen. It’s the most artistic freedom I ever seen outside of an animated film, as it seems to toss realism out the door in exchange for Méliès signature fantasy style of Filmmaking

Suddenly an insectoid alien inhabitant of the Moon appears, but it is easily killed by an astronaut, as the creatures explode when they are hit with a hard force. Their destruction was almost like a magic trick, understandable considering Méliès was a magician at one point. More aliens appear and it becomes increasingly difficult for the astronauts to destroy them as they are surrounded. The aliens arrest the astronauts and takes “them to their leader”. An astronaut picks the leader up off its throne and slams him to the ground, exploding him.

The movie really reflects the lack of knowledge Earth had on its surrounding galaxy in 1902 and how that lack of knowledge let are imaginations run wild. Most Science fiction of the beginning of the 20th century that dealt with space exploration always composed of a world vastly different from ours. Humanoids that look like insects are just one example of what you could find in all early Science Fiction literature. It’s no surprise this film is based on two works of literature by the fathers of Science Fiction.

The astronauts run back to their capsule. Five get inside. The sixth uses a rope to tip the capsule over a ledge on the Moon and into space. The alien tries to seize the capsule at the last minute. Astronaut, capsule, and alein fall through space and land in an ocean on Earth. The capsule floats back to the surface, where they are rescued by a ship and towed ashore. A final scene depicts a celebratory parade in honor of the travelers’ return.

This movie fascinates me with its concentration on fantasy and its looseness of science. Coming form an Era in time which science fiction is primarily based largely on the plausibility of science, it’s funny to watch a movie that tosses all that out the window. This may have a lot to do with the Era in which the movie was made, when the only way we could look at the moon was with a telescope on earth. A time when the conventional image of Mars was shaped by the observations of the astronomers Giovanni Schiaparelli and Percival Lowell, who observed what he took to be linear features on the face of Mars, which he thought might be water channels, which was misinterpreted from Italian to English translations as the word  “canals“, a word that implies artificial construction. When they told the world of this information, Sci-fi writers let their imagination do berserk with wonder it the possibility of what could be up there. Technically this is how all science fiction works.

Scientist would tell us the probability of what life on another planet would be like, and writers would turn that probability into “wouldn’t it be cool if” scenarios. It’s not at all surprising that the protagonists in this film are Astronomers who looked up into the sky and dreamed before becoming the astronauts that got there. In 1902 Astronomers did have the key to traveling the stars. Although using an oversized gun to shoot a group of men into space is a cartoon-like metaphor, Astronomers where technically the first men in space.

As logically as shooting yourself into a space might have been in 1902, most people back then would take this idea as mostly fantasy. We could not even fly yet, so the moon was far off.  However, despite being Science fiction in general no one really knew enough about the moon to say that there was not human-like insects that exploded upon forceful impact up on the moon.  Before 1959 when the last space probe orbited the dark side of the moon, no one could be sure there was no form of life on the moon, making the illusionist work actuate enough.