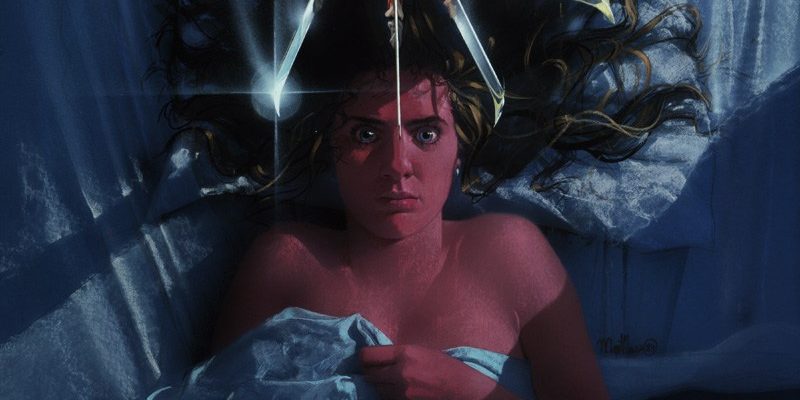 Actually, you know what? Dream Warriors is my favorite. A little bias for two reasons. One, it’s the first Nightmare I saw in a movie theatre and two, it has the kick ass song at the end “we’re the dream warriors”  love that. Although the song Nightmare that ends this movie is pretty cool.

I think the Dream Trilogy is actually what made Freddy a Super star, or at least it stopped making him the antagonist of his films and made him the semi protagonist as we begin to root for Freddie to  kill kids in their sleep  with such imagination.

In this movie, Freddy is still the dangerous seral killer that hunts children’s nightmares. The death toll is low and it’s more suspenseful than scary as Nancy, the  Final girl in this bitch tries to convinced her parents that this dude is real  and not just in her head. It’s weird how that is. You watch the movie, you see all the evidence pointing to the  fact that she’s not crazy but you still make her feel like she is. Even if her parents did not believe that the child killer they burnt alive 10 years ago is not coming back in her dreams  it’s taking the grown ups too long to realize  too much strange shit is going on not to take that proper action. The Fresh Prince was right, Parents Just Don’t Understand.

Spoiler Alert(technically this post id filled with them)-what is cool about the movie is that it technically is unresolved. Because of the concept of the movie they leave it open that the nightmare never ends. A lot of movies today do that grim ending all the time, but how cool is it that the master of horror, Wes Craven was doing long before it was a thing.

Oh, and let’s not forget Johnny Depp whose credit goes and Introducing Johnny Depp. I remember when he did Behind the Actors Studio after Pirates of the Caribbean and everyone got a little chuckle off the fact that this was his first movie. I wonder if Depp got the introducing credit after he became a superstar? It was not too long after this that Depp got his first taste of super stardom as the heartthrob on Fox’s first drama, 21 Jump Street. This does not put him any degrees closer from Kevin Bacon who also had the luxury of being killed by a Golden age slasher early in his career in Friday  the 13th.

You would probably say that Freddy’s  Dead: the Final Nightmare  or if it counts, Wes Craven’s New Nightmare was the worse movie, but I must admit, the original is my least favorite. It’s good just not my favorite.

Previous: A Nightmare on Elm Street 2: Freddy’s revenge.
Next: Nightmare on elm street 3: The Dream Warriors.