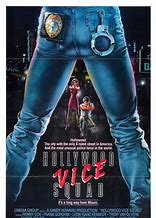 Not exactly the movie I would have expected Carrie Fisher to do after Star Wars, but there is something super attractive about Princess Leia playing a hooker (well playing a cop going undercover as a hooker). She’s a rookie in  man’s world trying to make a name for herself.

Hey! the guy who raped Pam Grier in Foxy Brown is in this as a cop!

Hollywood Vice Squad is loosely put together by the fact that all the main characters work for the same department in LA’s police force. One of the stories is the saddest cliché of a Mom who comes to Hollywood after she lost track of her runaway daughter who of course his attractive enough to make that money on the street and when you can make the money on the streets it don’t matter how sweet a girl mom thinks you are, you get on those streets, someone’s waiting to pimp you out.

One memorable dark moment is when Mom is telling the police captain, played by Ronnie Cox, that she does not have the working skills to make it on the street and her words are overlayered with a montage showing us that that’s not true one bit. Well done in getting me real sad for moms about the true of the Hollywood streets.

Other than that, not much to say about this flick. Wish I could give an A plus to Fisher’s role in it but it really was not to strongest point in this ensemble.