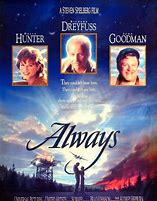 One of Steven Spielberg’s not so good films that the world forgot. Lucky for Spielberg. Unlike his 1st failed box office film, 1941, nobody really remembers Always, which is good for Spielberg’s record (but you know, even Micheal Jordan lost a game).

I remember Always but I never saw it. I thought the concept of the movie was hauntingly romantic. A very charming Richard Dryfuss plays a hot shot pilot whose daredevil attitude finally catches up with him and causes his death. As a ghost he comes back to Earth…I’m not exactly sure what he’s doing back on Earth and why he was set back by Audrey Hempburn( except that it was cool to see her in the movie).

The one and only side step that breaks this Spielberg flick. Dryfuss lead a great cast that included loveable John Goodman and very very appealing Holly Hunter. The movie looks amazing as well, but this story. I feel like Speilberg was not feeling it and if he’s not feeling it, it’s going to come accross just like it did.

Adding salt to the wound, less than a year later, Always was done right as the movie Ghost. Same basic premise of love lasting after death but Ghost was a far superior film when telling that story in the Haunting Romance kinda style that come from a love story with ghost.

Once again, great concept (I know cause I loved Ghost), but from the moment I started watching this movie I could tell I was not going to be feeling this. A know Spielberg hopes we keep forgetting this one…Always.

Previous: The Man of Tai Chi
Next: Bloodfist 6: Ground Zero