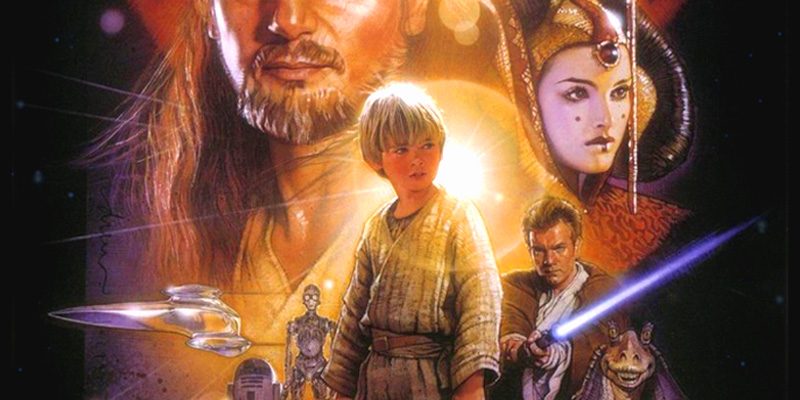 Whenever this movie come into my radar, I cannot help but try to watch it. Technically it’s only come across my radar 3 times: the 1st time it was in theatres, when it came back into theaters for a 3D run and now that I have Disney Plus, so I’ve only wacthed it twice and I’m about to wacth it a thrid time and I keep telling myself” how bad can it be?

I opened up a can of worms with that one. Well, out of all the Star Wars movies I seem to always forget how this movie went down, which is why whenever it comes up I need to see it.

So off the bat, I get Jar Jar Binks. I keep forgetting just how bad Jar Jar Binks is as a concept. I don’t find it that insulting per say, but it’s cringe worthy. Even when it was done 21 years ago. It does not make me flip out when I see it but it is a what the fuck moment for me. It’s like if a White comedian told a joke about how black people love chicken, that joke has to be the funniest bit in the roster or I’m gonna give more than an eyebrow raise. Jar Jar Binks is a lot like that joke, yeah I get it but its not as amusing as Lucas was hoping.

CGI may have had a lot to do with that. It’s odd to say that their was a problem with the CGI in this movie cause in 1999 this was the best of the best, the creme del la crème. Nobody could have done better it was impossible. It was beautifully done. Breathtaking artwork. Made the Phantom Menace look like a motion painting it was so nicely done. Yet, at the same time. Maybe because it was still in the baby stages, the CGI was slightly off. CGI is always slightly off cause the eye knows when its watching a Computer Generated Image over Digital Imagery. What’s the Difference? Well Jar Jar is a computer Generated Image and as such whenever he appeared on the screen you could tell that the real actors were not talking to anything. When they looked at him, it was like they were talking to air (cause most likely they were). So phytologically it makes Jar Jar not only a little politically unkind but it strengthens the fact that this was not necessary at all to the plot of this movie. Star Wars has the tendency to toss in new creatures just to show variety and diversity in the galaxy but everything about Jar Jar screams useless character given too much attention.

I don’t want to get into the CGI that much cause like I said the tech was in it’s baby stages when Star Wars came out and compared to other blockbusters trying to use the tech and it not aging well. I give those movies a 8 while Phantom Menace gets an eleven. So I can only assume anywhere I see where the background is not blending in with the people right and it looks fake only has to do with the limits on the technology at that point.

I said this a billion times. What I hate about Phantom Menace is that the movie is dull. Visually it looks great you can’t beat that. It’s so colorful and lively, but the story itself is dull as shit. More talking behind really nice backgrounds than action, nad I’m not talking about blowing shit up I’m just talking about how stiff everyone feels as the movie moves. I’m sure if you live and breath Star Wars like that it may not have bored you like it did me. Like I love Star Trek more than Star Wars so there lives, I’m sure, an episode of one of the series that would bore the shit out of an average viewer but have me on the edge of my seat. of course you can pull off having one boring episode of a long running tv show, your movies should be interesting. I feel like George Lucas forgot that when he planed the new trilogy, that he’s not actually making episodes he’s making movies and they all need to be exciting.

It does not help that when I 1st herd of episode one all the buzz (that I followed) was centered around Darth Mahal and the fight he was going to have with Obi Won and Qui-Gon Jinn, played by Liam Neeson, which I totally forgot. Fucking dude from Tekken is in this movie! Suddenly way better than I give it credit for, but I’m expecting the movie to be as exciting as that battle scene, but it was not. it was a lot of talk that I did not give a lick about.

The movie had some cool action scenes. besides the fight with Darth Maul all the action sequences kinda revolved around young Skywalker, all the good ones anyway. Star Wars was a film that everyone could enjoy, but I felt the concentration on Anakin  did tuen it into a kids movie.

It’s not a bad movie just not the best of the Star Wars movies that’s a given. I’ll see it again in another ten years.

Previous: Best of the Best
Next: Star Wars: Episode II – Attack of the Clones