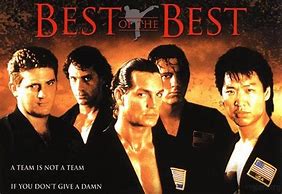 I remember seeing the trailers for this movie as a kid and thinking they really were pushing the song in the marketing. Yet in the movie, the song only makes one apperence in a pretty weak training montage.

The training montage was weak only because the entire movie was a training montage. Best of the Best is about a group of men selected for the U.S Karate team, and as such they already knew Karate so you did not get any “wax on wax off” moments. It was just the basic work outs for strength and excerise as the men bond, grow as indivulas and become a team.

Proof of this is the fact that James Earl Jones was their Karate coach. We all know Mr. Jones has the power of the drakside and he has done one or two boxing movies and a baseball movie so in that case, It’s easy for me to believe he’s can teach atheltes how to be better, but the fact that they used him weakend the concept that this is a marshal arts movie, just a little.

One of Eric Roberts greater performaces as a young father coming back from a career ending injury to be slected for the karate team. He may have done better perfomances but he showed hearet in this movie it was puching at my heart muscle greatly.

Previous: Robocop 2
Next: Star Wars: Episode I – The Phantom Menace