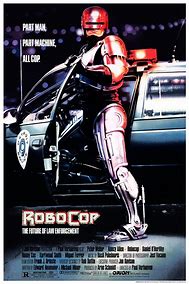 He’s not just a cop!

He is the greatest Cop!

No cop is better!

Cause he is a Cop, and a Robot!

It’s a little song I made when I was…A full fledge man. you can sing  along with the Robocop theme song.

One of the best superhero movies ever made before it was even a genre. One of the best comic book movies made that was not even a comic. Possible the worse movie to take your kids to see.

I saw Robocop in the theatres when I was like 8. Sure, if you look at the poster this movie is screaming for kids. It’s a Robot wearing a mask. It’s like Batman, only it’s Robocop, how could this not be children?

Well.. some brief nudity happens, which is nothing compared to the large amount of gun violence in this fucker (lot of cursing too).

As a child I did somewhat get the political satire of Robocop, but of course it would take a few showings as an adult to truly grasp what  Paul Verhoeven was saying with Robocop. Realistically, never fully got past the superhero thing, that is too cool.

One of the best action movies ever.