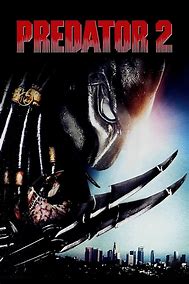 You can tell they are trying to hard to be better than Predator and for me the result’s are mixed.

Predator 2 may have had a decent budget simply because it acts as a follow up to the Schwarzenegger classic, but if they could not afford to get Arnold to come back, how big of a budget could they have had, right? The whole thing has an essence of a b-movie, the biggest clue being just how dated this thing feels. The clothes the scenery and the generic hip hop music all scream I’m trapped in the 90s and I can’t get out of it.

The concept was to go to the extreme of what the original predicator was. instead of an actual jungle they picked an urban one. Make scenes, at the time LA was a practical war Zone (Despite the film taking place in a grim near future ( I think) were it got worse) filled with the type of prey this alien likes. The Colombian cartel and the Jamaican Posse are in a three way war with the LAPD and the predator gets right into the middle of it to find some cool trophies. As far as trophies go I do feel that he can do better. I seen movies in which the Colombia cartel had in their employment monsters far worse than the predator. The Jamaican posse was being used cause their crime wave was “popular’ at the time for movies (and that’s face it, their is a joke in here about the predator being able to mix in with them due to the dreds), and the LAPD was lackluster despite the action icons they had playing them in the movie.

Danny Glover is the name use to put butts in the seats. I can only assume that despite not being as costly as The Oak, getting him to do this movie met that it was important to showcase who the only prey in the movie that could stop the predator was. It’s a lame comp out considering that Arnold was surrounded by some big ass muscles in that 1st movie, while it, despite trying to enhance the metaphor of LA being a real war zone, the only real physical menace the city has to offer is getting too old for this shit, but at least in Predator 2 he did not look it. I’m sure Glover enjoyed taking center stage with no white boys to show him up. He got to prove what an action hero he can be (too bad the movie is so lackluster).

On the police force, Danny is joined by the dude who played his lieutenant in all the Lethal Weapon movies, but that’s not important cause he’s only scene in one scene and he does not even get to face the predator. What’s more important is that Glover has Bill Paxton on his squad. Paxton who famously went up against the Xenomorph in the sequel to Alien, Aliens(that’s not a coincidence), pretty much plays the same character (it’s like this dude is the ancestor of Hudson). His presence in Aliens is way better and almost a waste of time in this movie

Except for the fact that it foreshadows the best and most memorial part in this film: The Xenomorph trophy. Somewhere at the end of the movie when Glover faces the predator in a pretty bad ass one on one, just before it starts we see the skull of a Xenomorph from the Alien franchise among a series of trophy skulls on a star ship mantle of the toughest aliens to hunt (Which  includes us). For like 15 years Predator 2 became a cult classic just because of the idea that one day the Xenomorph and the Predator might clash and it possibly stayed a cult classic until that day came that they made for a very Lackluster film called Alien vs. Predator

Overall, I’m not  hating this film. This is the 1st time I’ve seen it snice I saw it in the movie theater when I was 12. It’s completely dated and not the extreme follow up they hope for but it was still great to watch if not just for the nostalgia alone.