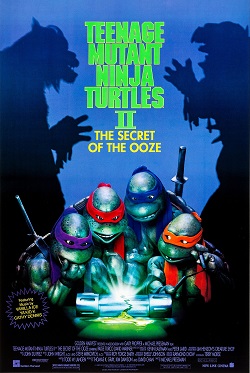 A good sign to a great movie is that when you have not see the movie in a long time it still holds up well. This will be the test for the recent reboots of the turtles movies. I hate them now but will I change my mind 30 years from now? (Though that would not be my judgement as these are not my Turtles, that would be a question to ask a 10 year old when he becomes an adult)

The cool thing about the original Teenage Mutant ninja Turtles being a b-movie is that they tend to be a quicker turn around than a major movie. The sequel to the box office hit came out approximately a year after the first one (March madness became Turtle madness) My memory can’t remember was that a long period for a tween of a short one, what I do remember was the second movie was heading towards the right direction.

The secret of the Ooze went into detail of the origin of the Turtles, which, I think for the very first time it was explained what turned the turtles into mutants. We all know of the story of a rat finding a group of turtles swimming in a broken canister of glowing green stuff and as they all grew to look humanoid the rat started teaching the turtles how to be ninjas (scientifically, I wonder how far fetched that is? They say a rat is really smart so would it be surprising that he actually did memorize the moves of his ninja master, but did not comprehend what he knew until he started to become sentiment, in fact teaching the turtles was the way he comprehended what he saw as a simple rat). In fact how the rat actually got from japan to New York without a master is the more Sci-Fi story. The secret of the Ooze focus on the Sci-fi of the story which was raw at the time. Not even the cartoon went anywhere to address where the Ooze came from even though the concept of the Shredder working for a living brain who had the ability to replicate the mutation was a perfect time to do so (Especially given the fact that the 1987 cartoon was the only one to alter the story to Hamanto Yoshi transforming into Splinter and doing a few episodes in which they attempt to make him human again (You think Yoshi started to regret being a rat once April was in the picture, coming down to the lair with that tight yellow jump suit)

It seemed like Ooze was slowly trying to move the Turtles towards what the cartoon was doing, or that’s what it seemed at first glace as a kid. The success of the original, met that the sequel could spend more than 13 mil on the deal. I could not see this in improvements on the turtles, which still looked the same, which is not a bad thing at all cause their costumes are great. Splinter did get an upgrade that made him look so much better and the puppeteering more interactive with the Turtles (ironically by being less interactive). I would say the real money went into the two new mutants in the film: Toka and Rahzar. A little disappointing as a kid at first. I’m sure most kids were expecting Rocksteady and Bebop from the cartoon to be the mutants that are made by Shredder to battle the turtles after he himself discovered their origins. I’m assuming it was more of a licensing thing, but it could also be that at some point in the R rated cartoons they did introduce other mutants into the fold (Who were not a Warhog and a Rhino), but the wolf and the snapping turtle (Who was not Slash from the cartoon) worked out well. I’m good with it (Better than when Rocksteady and Bebop actually did appear in a turtles movie). Then we have Super Shredder who was bonfire scary to look at as a mutant monster.

What I did like about the origin story is that it confirmed the Turtles were an accident. Too many superhero movies of present time try to hard to make sure all the heroes are connected to the villain to make this odd destiny thing. In fairness the turtles already had this connection being that Shredder killed their master’s master in a story told in the first film, plus technically, the turtles themselves are using the style of the foot clan in their fighting, so they did not need the ooze as another connection (After all, the ooze already connects the turtles to Marvel’s Daredevil, cause if you are not aware, The truck of radioactive material crashed in the streets of Hell’s kitchen and splattered into a young boys face making him blind but sending the other four senses into overdrive was also the truck the spilled the canister of ooze into the sewer drain thus creating the world’s most fearsome fighting team (despite neither being in the same universe). I thought the turtles being an pure accident is brilliant and one of the main reasons the first flick was successful (Telling an origin story can sometime drag a movie down (Exp: Spider-man is a great movie but Spider-man 2 is better cause Spider-Man 2 did not have to redo the origin).

One of the best elements of Ooze was Erine Reyes Jr. who played Donnatello in the 1st movie but officially makes his adult acting debut( He was in the Last Dragon and starred in the TV show Sidekicks as a child). Reyes (whose father did all the stunt corgeraphy for this film) is a great marshal artist so much fun to watch in the movie with his quick kicks and stuff. It was a solid idea to take him out of the costume and add him to the film.

Then there’s Ninja Rap. In my opinion, Vanilla Ice’s greatest contribution to music (in my head his only). To this day, I can’t help but to have the song in the back of my head. If you watch Ice’s Behind the Music special they say this is the start of the downfall of his career which his sad cause he made a bunch of kids happy with this song.

I think I see enough movies to tell the difference between one that does not hold up and one that stands the test of time. I like everything they added to The secret of the Ooze but I see why the original is the stronger movie (At the same time the third one does nothing for me), and it’s this test of time that I judge the latest movie installments which I think will not stand the test.