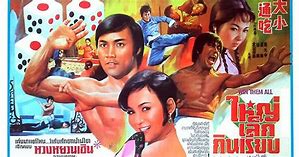 It sounds like a great Kung fu flick doesn’t it. I was expecting some Kung fu hero with his cock in hand going door to door to Kung fu Rivals houses and beating the snoot out of them in 17 minute long scenes of marshal arts brillance.

That’s not what I got. It is a kung fu flick or rather a flick done in the kung fu style of the time, but it has a story that goes past Kung fu. Win Them All is actually a reference to the fact that the movie is about a crooked casino that cheats to assure the house wins. Sure, they settle their differences with Kung fu but because Kung fu is not the major purpose of the film the focus on it is lackluster.

This may sound sexist but the weak Kung fu does allow the movie to showcase female protagonist more so (although that final battle is all dudes). You can tell that these dudes don’t have the skills to pay the bills because the chop socky is choped up to quickly to fake hits, blows and falls. It lacks any Peak king opera techiques and most likley were duedes who learned the fights on the fly.

Oddly a cheap Kung fu flick among cheap kung fu flicks, you still can’t help but to love it as the sound effects and bad dubs are still all in place. Plus, it’s not a bad movie. The casino story is a good one. It’s just not the kung fu extrazgana I was expecting.