I guess I was expecting a b-movie about monsters. Why would I assumed that when the movie is about Santa Claus? cause the dude is Conquering Mars. I think we all were wishing this, that’s  is why it got such low ratings on Imdb.

For what it is, it’s boring. A  catching pop song at the beginning and end of the film, and some interesting Martian costumes  to look at in a glace but nothing else to compel me.

It’s not terrible, which is it’s downfall cause it would be worth wild if I though it was so Bad it was good. It lies in limbo as a movie with a cool title but not worth watching. 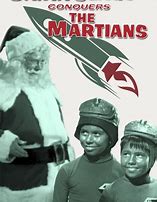 Plus, these kids look like their in black face.

Previous: The Monster Squad
Next: Win them All