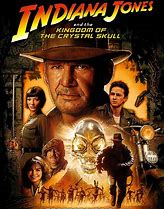 Home » Adventure » Indiana Jones and the Kingdom of the Crystal Skull

So very recently, I did a triple feature of the Indiana Jones movies leaving out Crystal Skull cause it’s the bastard child of the group. I saw the trilogy on DVD, a DVD that was released during the time Crystal Skull was coming out, so it had the cast interviewing about making the new one. As I listened to them talk, I realize something: I only saw the movie once when it came out in theatres and I don’t remember actually hating it, so I said “let me give this shit another go”.

Let me start off by saying that the idea of Indiana Jones is more desirable than the finished product. I don’t dislike the movies (in fact my favorite one is Temple of Doom (so you see where my head is at). I just noticed that the movies did not age as well as I thought they would. I have to keep telling myself that cars in the 1930s are not that fast which is why the car scenes are moving so slow, but that’s weird concidering all these movies are basiclly live-action cartoons. so why could you not make the cars faster Speilberg?

The movies seem small by comparions. This is me talking in an age where Green screens can open up a set. Watching a movie done on a real set that seems conformed? I think of Indiana Jones being a huge adventure movie but wacthing this I’m not feeling it as much.

Those were my only two cons on the trilogy everything else is amazing.

So now with Crystal Skull, Lucas and Spielberg fix the issues I had with the first three. They use green screen to open up the sound stage a little more so I don’t feel trap (with the exception of one Sceen in which Shia Lebeouf is fighting the Russians. The only part where the Green screen is not perfect (they didnt think I would notice but I did).

A 1950s vechicle is possibly twice as fast as one made in 1930 so the car chase speed is finally up to my standards.

Now here’s the thing, watching all four movies so close to each other I can only see that Crystal Skulls was following the same format as the other movies. Now, I herd Temple of Doom actually was not that well reecived when it frist went to the box office because it was too dark, but that’s not the case with Crystal Skulls which was a swashbuckling adventure just like Raiders and The Last Crusade.

So what the fuck went wrong?

Timing, plan and simple. Everything was out of time with Indian Jones. Harrison Ford was 15 years older , and the movie was set in a  world 15 years older than the original movies, and of course the movie itself is released 15 years after the last one. If this movie came out in the early 90s and took place in the early 40s with a Ford who can be in his early 40s, than I think this film would have been taken in way better, cause nothing about this shit is wrong.

I remember when I first saw the movie, a friend of mind was bitching about the scene where Indi saves himself from a nuclear explosion by hiding in a fridge. It’s a fucking cartoon. Every time Indy punches a dude I feel like I’m wacthing an espsode of Batman: the animated Series. So Indy using a fridge to save his ass is not bothering me. In fact I though it was cool.

When the movie came out people complained about Spielberg’s treatment of the Russians. It was the Cold War, that’s when the movie takes place, we hated the Russians like a Yankees fan hates the Red Sox (me).  I will say that hating the Nazis is very easy. You can make them the villain in any movie without raising any eyebrows, and without any sort of label of political correctness or incorrectness. Although, it was obvious Spielberg was using Cold War tension to mirror what was happening in the world 5 or 6 years after 9/11 . A strange multiplicity of irony that you learned the lesson of those not knowing History are doomed to repeat it in a live action cartoon about an butt kicking archologist. (I’m wonder how people would feel about the trement of the Russians if the movie came in 2019?)

When the movie came out, people where like Shia LeBeouf was lame…I get that. If you truly wanted to be cannon it was shown of the Young Indian Jones Chronicles that Indy actually has a daughter. Of course it’s possible for Indy to have both or for the women in the TV show to be his daughter-In-Law that he loves like she was his own. None of this has anything to do with Shia as Henry Jones the third. I do feel like Spielberg’s attempts to make sure we don’t forget that this movie was set in the 50s kinda messed up who Mud Williams could be. Some of the Fonzi shit seemed uncomfortable coming from Shia,, but I thought the chemestry between Shia, Harriosn and Karen Allen was really good.

Or it must have been the Aliens. Easier for the world to believe in the power of God being in an ark (makes an appearance in this movie) Or a cup Jesus made giving you immortality, than the idea that Indy is going after aliens.  Once again, Indy goes after a “false god” and is not being chased by the Nazis and the crowd is like this stinks.

Obviously, this movie is under the curse of the even films in a franchise (or is that just a Star Trek thing?). We like Temple of Doom from recon, but we did not like it when it came out. People who were in their 20s who told you how much crystal skulls sucked when It came out, were just kids when the first movies came out and were set to reject it. Plus, that South Park episode in which Lucas and Speilberg raped Indy was hilarious, but seriously, back-to-back-to-back-to back, pound for pound, Indiana Jones and the Kingdom of the Crystal Skull is just as enjoyable as the trilogy.

If the odds are on our side, we are all gonna love 5 when it comes out.