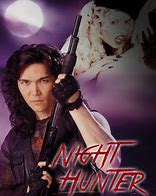 Nothing like a hidden gem amongst all the shit I can watch on my Amazon Prime account. So far, you can never go wrong with Don “the Drgaon” Wilson. The b-action star makes a great movie. So great I almost feel bad that he never had a major theatrical release. Almost, cause I’d like to think based on how good his movies seem to be to this day, that back then he was banking some serious money turning out Straight-to-Video hits (both finical ones and real ones).

I do recall reading some movie magazine back in the day (or it may have been the comic book magazine, Wizard) that talked about Wilson not only staring but producing this film (producing being a new element in his career at that time). I never saw the movie as I never caught it on cable or anything, so I was really excited to find it on Amazon (or rather it found me as it just popped up as a recommendation, which is not surprising considering all of the Don “the Dragon” Wilson flicks I’ve seen since I got the account.

In Night Hunter, Don “the Dragon” Wilson (trying to look a little like Brandon Lee in the Crow), plays a Buffy the Vampire Slayer type, someone destiny to be important to the cause of hunting and killing the undead. 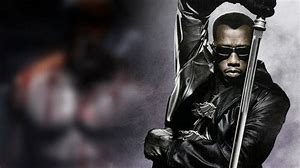 Beating this guy to the punch by a few years

Watching this movie, I noticed another cliché about vampires other than them being oversexualized and always wearing black. Vampires in movies are always organized, a lot like the mafia. They’re vampire families who must obey by vampire rules. It is logical, after all it makes up a good reason why so few know vampires exist. I’ve always been on the flip side of why vampires would want to live in sunny California. One thing that would explain this is if the infamous smog of places like LA  would actually act like a shield to the sun.

Night Hunter makes up a lot of its own myths to explain why vampires can walk among us (like the sun does not kill them but they are nocturnal by nature), Particularly Don plays a man in the vampire hunting family business who has been trained snice childhood to get rid of them all before a solar eclipse gives them that Dracula like power. He spent his entire life to kill them all only to discover vampire families that existed outside of the United States (duh) who seek revenge for their falling by hunting him down (using a sent that he gives off being an inherit vampire hunter).

It’s a very good movie that sometimes tries to be cooler than it really needs to be. Though Blade is fantastic, it’s not the best marshal arts movie in the world (Does Wesley actually have one of those?). Night Hunter is the same for Wilson. The concept of dealing with the supernatural with some karate kicks is minimized by how effective a gun is to something that’s faster and stronger than you. Only problem with that is the visual effects used to show how stronger and faster vampires can be is actually not the coolest effect (at least not in the world of streaming. the filmmakers do this jiggery camera effect when vampires go superhuman and at first I though something was wrong with my WiFi).

I actually herd that in Blade, the filmmaker asked Wesley Snipes to do strength and power over speed and agility (When Wes is capable of doing both at once) as he thought that was a better look for dealing with vampires. Looks like Steve Norrington saw this picture and thought it was a good idea for Blade. Not that it effects how good either picture is that much but I do think it was not the best way to go.

Night Hunter does not have the amount of nudity I would expect from a 1990s b-action movie (actually it has none at all ). It makes me think of Wilson differently. I always thought those I got the girl love making scenes I remember form other movies was always his idea (I’m exaggerating, only because he’s had two really awesome love scenes). The movie does have a lot of sex appeal, not an amazing feat for a film about vampires however.

Overall, this movie is definitely a hit. It maybe trying too hard as a vampire flick (casue as a Straight-to-Video movie it had very little to work with)but it’s definitely a Don “the Dragon” Wilson classic.