Not exactly. Nicole Eggert stars in a plot ripped off from Robocop, she’s an undercover cop whose cover gets blown by Richard Grieco, who plays a psychotic gang leader. They mess her up to near death and then she’s revived by a billion dollars somehow a city police force has to become somewhat of a naanobite filled Zombie.

If I sound like I did not like the plot, that’s not true (After all it is ripped off from Robocop). The movie itself felt like someone made a comic book and adapted it into a cheap b-movie.

It was perfectly cheap however. Tom Savani is in the movie as a henchman, and I’m sure he did double duty as a make up artist in the one scene that needed make up special effects 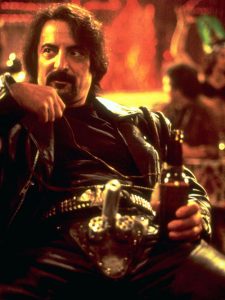 A year later he would wow us all as Sex Machine

A simple super hero costume that was nice and tight on the former (or at the time soon to be) Baywatch Star, that made her look cool when she busted into villian’s lairs firing her futuristic weapon.

A little werid to say the movie is good but I liked it, so the movie works.