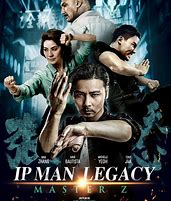 Wing Chin is awesome!
I thought this was going to be up man 4? My mistake. During the previews they should be a trailer of Ip Man 4 stating coming soon and Scott Adkins is going to be in it. yippie Kay yeah!
What I got here is a spin off of Ip man. Master Z from Ip a man three who was like the antagonist is now the protagonist for this film. If you ever seen the undisputed franchise it’s the same premise when the bad guy from the last movie becomes the good guy for this
Dave Batista’s acting was not as good as I’m use to, but he made a great  opponent for master z
So did Machelle Yeoh who does some old school Kung fu fighter that we don’t get as often from her anymore.

But of course Tony Jaa was too little, but overall I liked it.