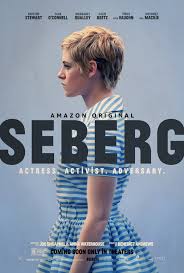 Best performance in an ok movie is not saying much. Not a huge fan of Stewart and the only movie I really loved with her in it was last mouth’s underwater, which was surprisingly better than expected. While Robert Patterson has been really developing his acting chops(to the point where people think he’s got it to play Batman), after Twilight, it has always felt like Stewart was just using her fame to get obscure movies made. Not a bad way to go but she was never the impressive part in any of those films, until now. I actually felt something from her performance, not a lot, but was good especially sense she is the main character. I have to be honest, the name Jean Senberg rings no bells but this movie portrayed her like she was the great white hype to the Black Panther Party. Not to say what was a small amount of money to her did not make waves in the cause, but the movie takes a big risk in this portrait. I thought Stewart held her own in the film but I’m sure they’ll be backlash. My favorite performance in the film was Vince Vaughn however. I was not expecting a film with Stewart, Vaughn, Antony Mackie and the woman that played Domino in Deadpool 2. That’s a few big names there. Vaughn does a good job playing a lovable jerk but in this movie he’s not so love able, and it stand out perfectly. Overall, the film’s not great, but it was great for Kristan Stewart. I like the effort she put into it.