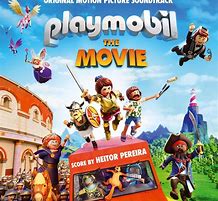 It starts out with a song so already I’m like yuck. But I’m kinda happy that what I thought was going to be a completely animated story had a live action part. Not that I hate animation or anything like that but the live action set up was good for hyping me up on a concept I know nothing about really. Plus it adds a really funny bid when the live action kids become the Playmobil characters. It’s like the b-movie version of the LEGO movie. A brother and sister get sucked into the world of Playmobil playsets and when little brother gets kidnapped big sis teams up with a food truck dude and super secret spy Rex dasher (who was really entertaining) to save her brother. Overall Playmobil the movie is not bad. The musical numbers did not impress me (but it’s really not my thing) I did love the animation. Very good looking and flowed nicely. Not much of a story just a watered down reason to feature all the most popular or moreCommon Playmobil playsets.
For what it is I was pretty entertained by what was happening.