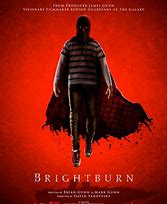 A horror story in which Superman is the monster

It’s like an Elseworld story writer by comic book icon, Frank Miller. Somehow they got away with telling Superman’s Story: A married couple who own a farm in Kansas are tryin to have a baby so desperately that they think it’s a god sent when one comes in a rocket ship from space. Now, in the DC Extended universe this situation lead to a lackluster film, but in the hands of James Gunn who directed Guadians of the Galaxy vol one and two for the marvel cinematic universe, it becomes a unique horror experiment similar to his film Slither. It’s disturbing, like the Omen disturbing, and they made this disturbance fun to watch. Like all other adopted kids he gets a little touchy when discovering the truth about himself. Adding in the superpowers only makes his lashing out far more scary. It seems goofy at times but the goofy stuff only helps make the situation more frightening. You’ll laugh but at the same time you’ll be like “that was messed up” Fantastic!