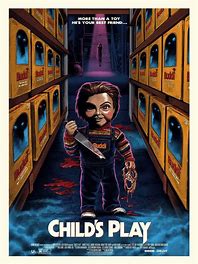 Can’t use the word brilliant, but 2019’s version of the 1990 slasher goes the obvious direction of changing the mystic origins of chucky to a more technically one, one that kinda makes sense if you ever got a defective iPhone or PlayStation or something. It’s funny how this chucky persnafied all parents fears on what would happen if you exposed your 8 year old to horror movies. The remake keeps up with the fact that chucky has become this satire. It’s just as funny as it is creepy making fun of itself equally as it disturbed the audience. Nothing says this more than the fact that no kid in his right mind would even want a doll that purposely looks as creepy as the one they made for this remake, espeally one voice by Mark Hamill. And shout out to Aubrey Plaza who plays a hot mom who hates her job. It really added some meat to what could have been a Dull plot. It’s not trying to be better than the original. It’s just trying to squeeze another dollar out of the franchise, but in knowing what it is it makes it worth that dollar.